My wife Jean has been against my crossdressing but puts up with it. We are retired and decided against having a family long ago. One weekend her best friend Denise was staying with us. After drinking to much Jean starting in on my crossdressing habits with her. That’s where it all began.

It’s hard being a woman?

Both her and Denise were telling me how hard it is to be a woman in today’s world. I argued that I could do as well as either of them as a woman. My wife grew angry and told me to prove it.

Denise and Jean talked in private and came back smiling. Denise told me that they were going to force me to prove my point. If I did not go along pics of my female persona would be shared on social media. Denise told me to prove myself as a woman and I would take my place at her brother Bruce’s side as his wife. I would live with him for 1 month 24/7 as his dutiful wife.

I knew Bruce was gay and had met him several times. He was much bigger than myself and lived alone outside of town. I tried to back out but my wife showed me pics ready to post online of me with her finger ready to hit enter.

So Denise told Bruce my situation and he was happy to oblige. Jean and Denise waxed my whole body. Permed my hair and had me looking very feminine in just a few days. Jean, Denise and I are all about the same size so I was going to have plenty of clothes.

Jean came up with an idea that really caught me off guard. I was dressed in my wife’s wedding gown and taken to a church in the country. Bruce met us there in a tux. Jean and Denise took several pics of us together. The pastor even came out and we had a pic of us together at the alter. Denise took these pics and had them framed. They were hung in Bruce’s house as our wedding pictures.

Denise had also got on the internet and made us a legal looking marriage license. Bruce had a wedding ring from his grandmother that was now on my finger. Denise had a ring for a man which I put on Bruce. For all practical purposes I was now Bruce’s “legal” wife.

Jean and Denise set up my closet in Bruce’s master bedroom and moved me in. Bruce was self employed so his hours varied. There was no delay in treating me as his new wife. I took on all the homemaker responsibilities. He had me dress in babydoll nightwear. I was now a woman in a man’s bed.

Performing all of my wife duties

After a couple weeks Jean and Denise began visiting us pretty regular. I was treated and referred to as Bruce’s wife Sandy. Jean never made any mention of our actual relationship. After 1 month Jean and Denise met Bruce and I to discuss my actions as a woman. I could not believe my ears. Jean and Denise told me they had discussed my behavior with Bruce. Bruce told them he needed more time with me to give them an opinion. I was to stay with Bruce for 6 more months!

It has been 2 months and I am beginning to feel strange. I think I am actually falling in love with Bruce. He tells me all the time he loves me. Jean and Denise visit us and I do not even think of Jean as my wife anymore. We are all just girl friends.

Sex with Bruce is great. I actually have orgasms with his gorgeous cock inside me. I have even told him I wish I could get impregnated by him. He has taken me on short trips to other towns and we mingle in public as a normal married couple. I love walking with him presenting myself as his kept woman.

After 4 months Jean and Denise were over one night and began laughing. Jean my wife had filed for divorce and had my signature forged. We were legally divorced. She handed me a birth certificate and drivers license that matched my name on Bruce and my wedding certificate “Sandy”. Denise told me I was now permanently Bruce’s wife.

Jean and Denise left telling me I had made my point and I was a very good woman and wife. Bruce took me to bed and made wild sex with me for hours. After he came in me several times in both ends he relaxed. He had me put on my babydoll and black pumps. He positioned me between his legs and made me sleep with his cock in my mouth all night.

So here I am living as a sexy housewife in love with my man. Bruce does not want me to have a sex change. He likes for me to have the occasional humiliation of knowing what has been done to me. My penis is no bigger than a nub anyway as he has been giving me estrogen. It is nice having real tits to fill my bras. Well at least I made my point! 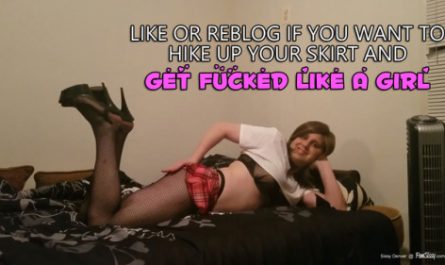 How many sissies wanna get fucked like a girl? 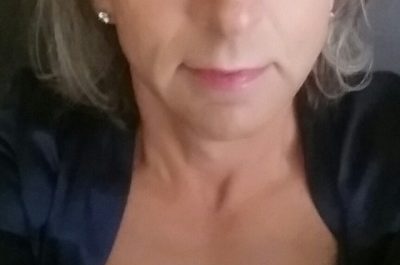 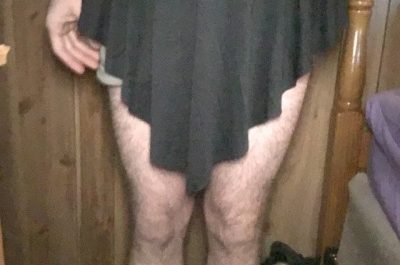 Shave off all that body hair

Mistress teases until you beg to worship her body

Add Yourself to the Sissy Wall of Shame

Me too I want my. White sissy ass ruined by like 10 bbc barebacked back to back till my sissy…

That is hot luv it I wanna play dress up with u and have our sissy. Littys wand vibes thru.…

Good replies in return of this issue with genuine arguments and describing all on the topic of that.